The Myth of the Muslim Tide 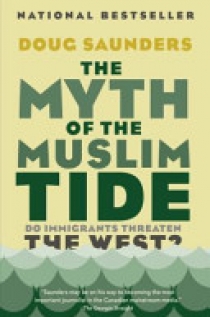 From the award-winning author and Globe columnist Doug Saunders, a short, powerfully argued, debunking of the myth of the Muslim tide, which is being deployed to dangerous effect by numerous commentators and politicians in Canada, the United States and Europe. Even among people who would never subscribe to its more dramatic claims, the "Eurabia" movement has popularized a set of seemingly common-sense assumptions about Muslim immigrants to the West: that they are disloyal, that they have a political agenda driven by their faith, that their high reproduction rates will soon make them a majority. These beliefs are poisoning politics and community relations in Europe and North America--and have led to mass murder in Norway. Rarely challenged, these claims have even slipped into the margins of mainstream politics. Doug Saunders believes it's time to debunk the myth that immigrants from Muslim countries are wildly different and pose a threat to the West. In the process, he shatters the core claims that have built a murderous ideology and draws haunting historical parallels showing how the same myths stuck to earlier groups, such as Jews and Roman Catholics. His work will become a vital handbook in the culture wars that threaten to dominate North American and European elections and media discussions in 2012 and afterwards.