The Mental Life of Modernism 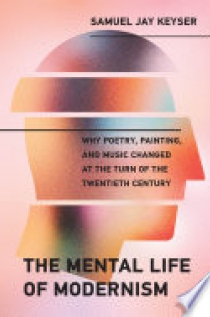 An argument that Modernism is a cognitive phenomenon rather than a cultural one. At the beginning of the twentieth century, poetry, music, and painting all underwent a sea change. Poetry abandoned rhyme and meter; music ceased to be tonally centered; and painting no longer aimed at faithful representation. These artistic developments have been attributed to cultural factors ranging from the Industrial Revolution and the technical innovation of photography to Freudian psychoanalysis. In this book, Samuel Jay Keyser argues that the stylistic innovations of Western modernism reflect not a cultural shift but a cognitive one. Behind modernism is the same cognitive phenomenon that led to the scientific revolution of the seventeenth century: the brain coming up against its natural limitations. Keyser argues that the transformation in poetry, music, and painting (the so-called sister arts) is the result of the abandonment of a natural aesthetic based on a set of rules shared between artist and audience, and that this is virtually the same cognitive shift that occurred when scientists abandoned the mechanical philosophy of the Galilean revolution. The cultural explanations for Modernism may still be relevant, but they are epiphenomenal rather than causal. Artists felt that traditional forms of art had been exhausted, and they began to resort to private formats—Easter eggs with hidden and often inaccessible meaning. Keyser proposes that when artists discarded their natural rule-governed aesthetic, it marked a cognitive shift; general intelligence took over from hardwired proclivity. Artists used a different part of the brain to create, and audiences were forced to play catch up.