The Maternal Roots of the Gift Economy 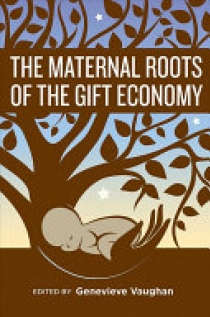 The idea of a free gift economy has become important in the movement for alternative economics, however the connection with women and especially with mothers has not been widely understood. The conference -The Maternal Roots of the Gift Economy, - held in Rome in 2015, brought together women and men from around the world to discuss this important issue.In a moment when the values of Patriarchy and the market seem to have triumphed, the values of mothering and care are more sorely needed than ever. This book explores many aspects of the gift paradigm from a variety of points of view, taking into account theory and practice, activism and spirituality, as well as the experience of Indigenous societies North and South where maternal values are still at the centre for both women and men. Readers will find abundant evidence of ways of thinking and being that are possible beyond the Patriarchal Capitalism that is now threatening the existence of life on Mother Earth. The book is divided into four sections: Theory, Practice, Practice in Non-Western Realites and Spiritualities. Articles are by well-known scholars and activists from around the world and include: Luciana Percovich, Mariam Irene Tazi-Preve, Erella Shadmi, Simone Woerer, Susan Petrilli, Kaarina Kailo, Heide Goettner-Abendroth, Barbara Alice Mann, Coumba Toure, Diem LaFortune, Vicky Noble, and many more.