The Long Arc of Justice 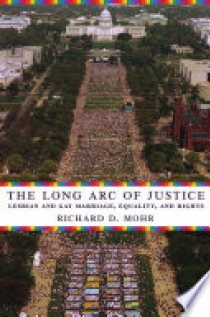 Richard D. Mohr adopts a humanistic and philosophical approach to assessing public policy issues affecting homosexuals. His nuanced case for legal and social acceptance applies widely held ethical principles to various issues, including same-sex marriage, AIDS, and gays in the military. Mohr examines the nature of prejudices and other cultural forces that work against lesbian and gay causes and considers the role that sexuality plays in national rituals. In his support of same-sex marriage, Mohr defines matrimony as the development and maintenance of intimacy through which people meet their basic needs and carry out their everyday living, and he contends that this definition applies equally to homosexual and heterosexual couples. By drawing on culturally, legally, and ethically based arguments, Mohr moves away from tired political rhetoric and reveals the important ways in which the struggle for gay rights and acceptance relates to mainstream American society, history, and political life.