The Hope That Remains 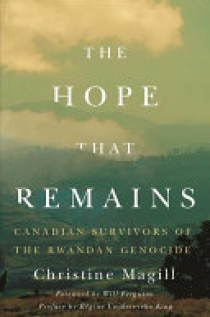 In 1994 one of the worst genocides in human history took place in Rwanda--more than one million people were killed in 100 days. Each chapter in The Hope That Remains focuses on a Rwandan survivor and the journey to escape the violence and chaos that overtook their country. Two of the featured stories follow individuals who fled before the killing began and the events that caused them to flee. Both were then faced with the challenge of being outsiders looking in as events deteriorated and their families were slaughtered. The other eight survivors share their detailed and gripping experiences of trying to stay alive while trapped in a nation of killers. Twenty-five years after the Rwandan Genocide, the scars are still very real, and rebuilding and coping with the trauma remains an emotional struggle. Despite their horrific pasts, the survivors share feelings of hope, forgiveness, and a belief in a better future. They demonstrate the strength and courage it takes to leave behind the known to seek a better life in a new country. Their journeys to Canada contain humorous moments, thoughtful insights, and an overwhelming love and pride for the nation they now call home.