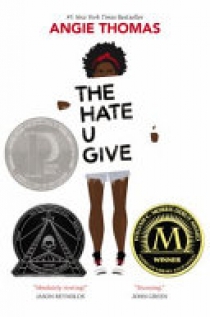 The Hate U Give

8 starred reviews ∙ William C. Morris Award Winner ∙ National Book Award Longlist ∙ Printz Honor Book ∙ Coretta Scott King Honor Book ∙ #1 New York Times Bestseller! "Absolutely riveting!" —Jason Reynolds "Stunning." —John Green "This story is necessary. This story is important." —Kirkus (starred review) "Heartbreakingly topical." —Publishers Weekly (starred review) "A marvel of verisimilitude." —Booklist (starred review) "A powerful, in-your-face novel." —Horn Book (starred review) Sixteen-year-old Starr Carter moves between two worlds: the poor neighborhood where she lives and the fancy suburban prep school she attends. The uneasy balance between these worlds is shattered when Starr witnesses the fatal shooting of her childhood best friend Khalil at the hands of a police officer. Khalil was unarmed. Soon afterward, his death is a national headline. Some are calling him a thug, maybe even a drug dealer and a gangbanger. Protesters are taking to the streets in Khalil’s name. Some cops and the local drug lord try to intimidate Starr and her family. What everyone wants to know is: what really went down that night? And the only person alive who can answer that is Starr. But what Starr does—or does not—say could upend her community. It could also endanger her life. And don't miss On the Come Up, Angie Thomas's powerful follow-up to The Hate U Give.

By Trudy Spiller
September 1, 2017 | 40 pages
A timeless story that will always help our students and children connect with Nature. &nbspWhen a young girl from the Gitxsan Nation argues with her brother, she remembers the teachings of her grandmother and goes in search of a stone to share her feelings with. This engaging First Nation's...  END_OF_DOCUMENT_TOKEN_TO_BE_REPLACED
Kids' Books

By John Spray
Pajama Press Inc. | October 29, 2019 | 44 pages
What do cats think when they get caught in the rain, or when a bird is just out of reach? If they could tell us, their voices would be full of charisma and attitude. Cats have been our companions for thousands of years. From the sandy roads of Ancient Egypt to the shopping bag left on the kitchen...  END_OF_DOCUMENT_TOKEN_TO_BE_REPLACED
Kids' Books

Dictionary for a Better World

By Irene Latham,  Charles Waters
Carolrhoda Books | March 29, 2020 | 120 pages
"Organized as a dictionary, entries in this book for middle-grade readers present words related to creating a better, more inclusive world. Each word is explored via a poem, a quote from an inspiring person, and a short personal anecdote from one of the co-authors, a prompt for how to translate the...  END_OF_DOCUMENT_TOKEN_TO_BE_REPLACED
Kids' Books