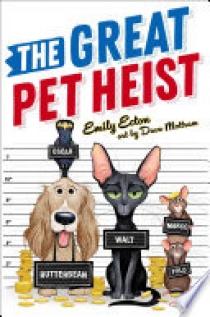 Ocean’s Eleven meets The Secret Life of Pets in this hilarious and delightfully illustrated novel following a ragtag group of pets who will do whatever it takes to avoid being sent to the pound. Butterbean knew she wasn’t always a good dog. Still, she’d never considered herself a BAD dog—until the morning that her owner, Mrs. Food, fell in the hallway. Admittedly the tile was slipperier than usual, mostly because Butterbean had just thrown up on it. Now Butterbean and her fellow pets have to come up with a grand plan to support themselves in case Mrs.