The Golden Mare, the Firebird, and the Magic Ring 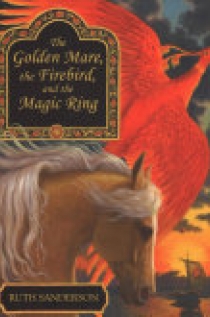 A beautiful retelling of the classic Russian folktale with lavish full-color oil paintings. Brave deeds and wondrous magic come together in this tale based on classic Russian folklore. A young huntsman named Alexi leaves home seeking adventure and fortune. Instead, he finds the Golden Mare, who pledges eternal loyalty in exchange for sparing her life. With mare's help, Alexi become the Tsar's best huntsman, but then the jealous Tsar presents him with several impossible tasks, threatening to have him killed if he fails. Each time, Alexi secretly enlists the help of the Gloden Mare--and succeeds. But his final task is to win Yelena the Fair, a lovely young maiden whom the old Tsar wants as his bride. Will Alexi be able to use his own powers to save himself and Yelena?