The Golden Boy of Crime 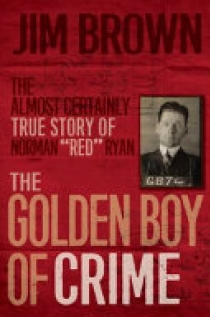 For readers of The Devil in the White City and The Massey Murder, the incredible story of Norman “Red” Ryan—“the Jesse James of Canada” and the “Kardashian” of the 1920s and ’30s Dubbed “the Jesse James of Canada,” Norman “Red” Ryan was infamous in the 1920s and ’30s until he was gunned down in an attempted robbery in Sarnia, Ontario. Ernest Hemingway wrote about Ryan’s escape from Kingston Penitentiary for the Toronto Star, Morley Callaghan based a novel on him and stories of Ryan and his crimes filled newspapers and airwaves. One of the first Canadians to be granted parole, he was held up by Prime Minister R. B. Bennett as a model of rehabilitation and became a regular guest at Toronto police picnics. All the while, however, Ryan was continuing a crime spree on the side. Jim Brown, filmmaker and CBC Radio host, tells the incredible true story of “Red” Ryan, a larger-than-life criminal whose fame and legend were much encouraged by the media—he was the “Kardashian” of the time—and whose story endures.