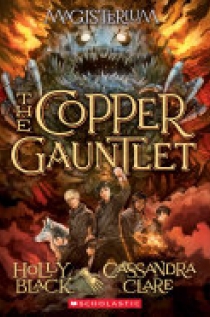 Callum Hunt's life has been difficult ever since he was admitted to the Magisterium, since his father suspects him of being evil, and his closest companion is a Chaos-ridden wolf--but when he discovers that his father may be trying to destroy both him and Havoc, he escapes back to the magical world and he and his friends Aaron and Tamara, become involved in the search for the stolen Alkahest, a copper gauntlet with dangerous powers.