The Case of the Story Rock 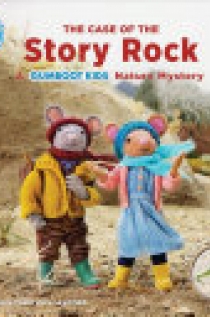 Scout and Daisy are on expedition in the desert and Scout has uncovered something incredible -- a rock has told him a story! But how can a rock tell a story? Join Scout as he helps Daisy find clues to solve the Case of the Story Rock. INTRODUCING THE GUMBOOT KIDS A celebration of nature, curiosity, discovery and mindfulness! Adapted from the award-winning TV show The Gumboot Kids comes this outstanding new series of nature mystery books that celebrate the joy and wonder of mindfully exploring the natural world. Perfect for inquisitive young minds, The Gumboot Kids' nature mysteries feature beloved characters, Scout and Daisy, working through a series of clues in order to crack the case. In each mystery Scout and Daisy affirm their findings with a trip to the library where they verify the evidence they've gathered in nature and solve the mystery before having a mindful moment to reflect on their journey. With beautifully rendered and painstakingly detailed art, Scout and Daisy's adventures are also a visual feast that will have kids poring over the pages time and time again. Each book concludes with two pages of field notes on the mystery subject, as well as a nature craft inspired by the mystery, for kids to try at home. About the Show Winner of numerous awards and an award finalist for the two most prestigious awards for kid's entertainment -- the Japan Prize (2018) and the Prix Jeunesse International (2018) -- The Gumboot Kids (120 episodes across three time formats) is seen widely across Canada, Australia, South Korea and the United States ... and its viewership is growing. The Gumboot Kids won a Parents' Choice Award, and the show is also approved by the Dove Foundation, a non-profit organization whose mission is to encourage and promote the creation, production, distribution and consumption of wholesome family entertainment. "The Gumboot Kids is creating a 'new normal' for an entire generation. This pioneering series transports young children into the practice of mindfulness and the magic of nature. The values of gratitude, appreciation and respect will stay with young viewers throughout a lifetime, creating a world we all want to live in." --Sandra de Castro Buffington, Founding Director, Global Media Center for Social Impact, UCLA