The Broadcast 41 - Women and the Anti-Communist Blacklist

By Carol A. Stabile 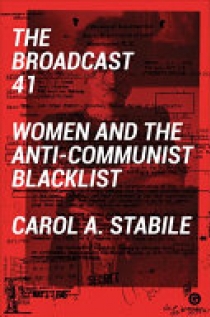 How forty-one women--including Dorothy Parker, Gypsy Rose Lee, and Lena Horne--were forced out of American television and radio in the 1950s "Red Scare." At the dawn of the Cold War era, forty-one women working in American radio and television were placed on a media blacklist and forced from their industry. The ostensible reason: so-called Communist influence. But in truth these women--among them Dorothy Parker, Lena Horne, and Gypsy Rose Lee--were, by nature of their diversity and ambition, a threat to the traditional portrayal of the American family on the airwaves.