Terminated for Reasons of Taste 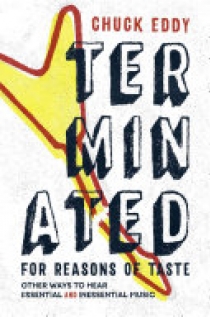 In Terminated for Reasons of Taste, veteran rock critic Chuck Eddy writes that "rock'n'roll history is written by the winners. Which stinks, because the losers have always played a big role in keeping rock interesting." Rock's losers share top billing with its winners in this new collection of Eddy's writing. In pieces culled from outlets as varied as the Village Voice, Creem magazine, the streaming site Rhapsody, music message boards, and his high school newspaper, Eddy covers everything from the Beastie Boys to 1920s country music, Taylor Swift to German new wave, Bruce Springsteen to occult metal. With an encyclopedic knowledge, unabashed irreverence, and a captivating style, Eddy rips up popular music histories and stitches them back together using his appreciation of the lost, ignored, and maligned. In so doing, he shows how pop music is bigger, and more multidimensional and compelling than most people can imagine.