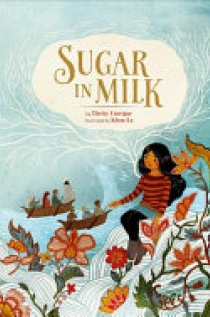 A timely and timeless picture book about immigration, refugees, acceptance, and tolerance from a NYT bestselling author. A young girl in modern times comes from India to live in America with her extended family. She feels so alone-like she's not wanted-and then remembers a story her mother once told her about a group of Persians who were ousted from their country and who sailed to the Western shores of India in search for a new home. The king of the region in India did not want to let them in and explained (using a glass of full milk) that the community was simply too full to let them in. The king of the Persian refugees then dumped some sugar into the milk, stirred until it dissolved, and explained to the king that not only would his people integrate well into their society but they would also help sweeten their culture. The Indian king lets them in and they prosper. And, in the end, the young girl realizes that she, too, is being accepted by those in her neighborhood and that she can finally start feeling a part of this new American society.