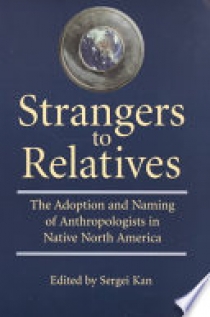 Strangers to Relatives is an intimate and illuminating look at a typical but misunderstood part of anthropological fieldwork in North America: the adoption and naming of anthropologists by Native families and communities. Adoption and naming have long been a common way for Native peoples in Canada and the United States to deal with strangers who are not enemies. For over a century, adoption and naming have also served as an important means for many Native American and First Nation communities to become connected to the anthropologists visiting and writing about them.øIn this outstanding volume, leading anthropologists in the United States and Canada discuss this issue by focusing on the cases of such prominent earlier scholars as Lewis Henry Morgan and Franz Boas. They also share personal experiences of adoption and naming and offer a range of stimulating perspectives on the significance of these practices in the past and today. The contributors explore the impact of adoption and naming upon the relationship between scholar and Native community, considering in particular two key issues: How does adoption affect the fieldwork and subsequent interpretations by anthropologists, and in turn, how are Native individuals and communities themselves affected by adopting an outside scholar whose aim is to learn and write about them?øStrangers to Relatives not only sheds valuable light on how anthropology fieldwork is conducted but also makes a seminal contribution to our understanding of the ongoing, often troubled relationship between the academy and Native communities.