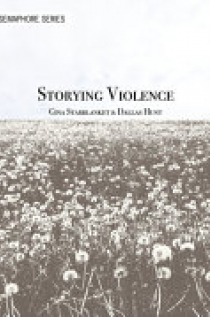 Storying Violence explores the 2018 murder of Colten Boushie and the subsequent trial of Gerald Stanley. Through an analysis of relevant socio-political narratives in the prairies and scholarship on settler colonialism, the authors argue that Boushie's death and Stanley's acquittal were not isolated incidents but are yet another manifestation of the crisis-ridden relationships between Indigenous and non-Indigenous peoples in Saskatchewan, ones that evidence the impossibility of finding justice for Indigenous peoples in settler colonial contexts. We situate Indigenous peoples' presence as a threat to the type of security that settler colonial societies promise settler citizens, pointing to the Stanley case as one instance where such threats are operationalized as mechanisms to sanction violence against Indigenous peoples and communities.