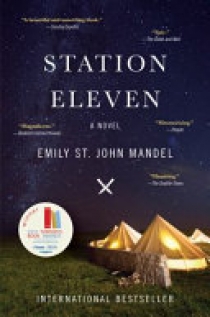 Winner of the Toronto Book Award and the Arthur C. Clarke Award Finalist for the National Book Award, the PEN/Faulkner Award, and the Sunburst Award Longlisted for the Baileys Prize and for the Andrew Carnegie Medal for Excellence in Fiction A New York Times and Globe and Mail bestseller The international publishing sensation now available in paperback: an audacious, darkly glittering novel about art, fame and ambition, set in the eerie days of civilization’s collapse One snowy night, a famous Hollywood actor dies onstage during a production of King Lear. Hours later, the world as we know it begins to dissolve. Moving back and forth in time—from the actor’s early days as a film star to fifteen years in the future, when a theatre troupe known as the Travelling Symphony roams the wasteland of what remains—this suspenseful, elegiac, spellbinding novel charts the strange twists of fate that connect five people: the actor, the man who tried to save him, the actor’s first wife, his oldest friend and a young actress with the Travelling Symphony caught in the crosshairs of a dangerous self-proclaimed prophet. Sometimes terrifying, sometimes tender, Station Eleven tells a story about the relationships that sustain us, the ephemeral nature of fame and the beauty of the world as we know it.