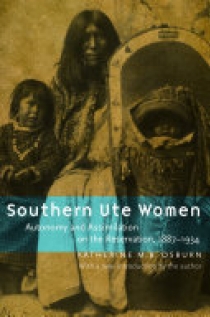 After the passage of the Dawes Severalty Act in 1887, the Southern Ute Agency was the scene of an intense federal effort to assimilate the Ute Indians. The Southern Utes were to break up their common land holdings and transform themselves into middle-class patriarchal farm and pastoral families. In this assimilationist scheme, women were to surrender the considerable autonomy they enjoyed in traditional Ute society and become housebound homemakers, the ?civilizers? of their fathers, husbands, brothers, and sons.