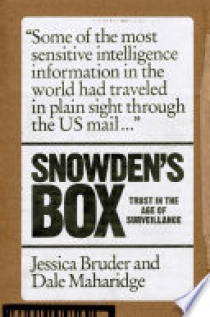 Two behind-the-scenes players in the edward snowden story reflect on the meaning of snowden's revelations in our age of surveillance One day in the spring of 2013, a box appeared outside a fourth-floor apartment door in Brooklyn, New York. The recipient, who didn't know the sender, only knew she was supposed to bring this box to a friend, who would ferry it to another friend. This was Edward Snowden's box--materials proving that the U.S.