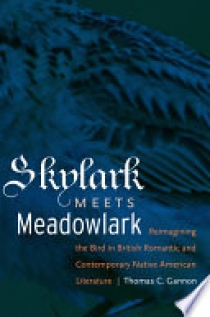 AøNative rereading of both British Romanticism and mainstream Euro-American ecocriticism, this cross-cultural transatlantic study of literary imaginings about birds sets the agenda for a more sophisticated and nuanced ecocriticism. Lakota critic Thomas C. Gannon explores how poets and nature writersøin Britain and Native America have incorporated birds into their writings. He discerns an evolution in humankind?s representations?and attitudes toward?other species by examining the avian images and tropes in British Romantic and Native American literatures, and by considering how such literary treatment succeeds from an ecological or animal-rights perspective. ø Such depictions, Gannon argues, reveal much about underlying cultural and historical relationships with the Other?whether other species or other peoples. He elucidates the changing interconnections between birds and humans in British Romanticism from Cowper to Clare, with particular attention to Wordsworth, Coleridge, Shelley, Byron, and Keats. Gannon then considers how birds are imagined by Native writers, including early Lakota authors and contemporary poets such as Linda Hogan and Joy Harjo. Ultimately he shows how the sensitive and far-reaching connections with nature forged by Native American writers encourage a more holistic reimagining of humankind?s relationship to other animals.