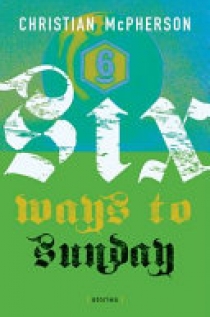 Shortlisted for the 2008 Relit Award for Fiction Dirty pool halls, greasy restaurants, suburban skateboarder showdowns, and dangerous drug dens--some things in life just aren't very subtle. And neither are the short stories in Six Ways to Sunday. In fact, they brashly make out with subtlety's teenage crush, beat subtlety into the sidewalk, take a dump on its favourite patch of daisies, and unceremoniously bury it somewhere in the woods near Morgan Lake, Quebec. Realism is often the central element of short fiction, and often too much. Christian McPherson reminds us that to many people, fictions are central to their realities: lottery tickets, deals with God, the delusion of owning the world--or at least selectively rebuilding it in models, bruise-covering makeovers, a chronic criminal playing parent, beating the bad guys and getting away with the loot, and, most certainly, the divine creation of the perfect chilidog. McPherson infuses his gritty settings with a hyperkinetic imagination and fantastically animated writing style that make his stories impossible to put down or forget. The characters who subsist Six Ways to Sunday are the xenophobic, the substance-abused, the VLT-addicted, and the just plain lost, shining bright and battered in the dingy recesses of the bar.