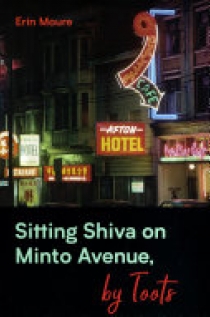 "SITTING SHIVA ON MINTO AVENUE, BY TOOTS tells the story of a man who had no obituary and no funeral, and who would have left no trace if it weren't for the woman he'd called Toots, who took everything she remembered of him and--for seven days--wrote it down. In recording the tale of the little man, through memories and Google searches, quotes from Rilke and hints of recipes from Madame Jehane Benoit, Toots gives a glimpse into a entire era of urban Canada, from Vancouver's Downtown Eastside, Main Street, and Chinatown, to a long-ago Montreal and its entertainment between the Great Depression and Expo 67."--Back cover.