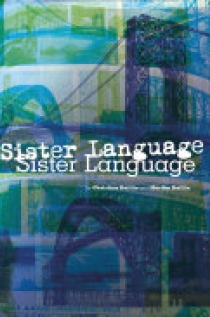 Sister Language is a collaboration, a back-and-forth, composed mainly of letters and other writings, between two sisters, one of whom, Christina, is schizophrenic. She can barely function in the "real" world, partly because, though brilliant, she has an intense, all but all-consuming relationship with language that is English, but mostly an exploded English of her own. For her, oral communication using everyday English with almost anyone other than her sister, is terribly difficult. On the other hand, and a Real Big Other Hand it is, when she comes by a format that disciplines her linguistic rapids just a little, she shows herself to be a virtuoso of written English. The "difficult" writers she exults in reading, and in whose writing family she belongs, are what she calls the "triumvirate" of Samuel Beckett, Gertrude Stein, and James Joyce, he of Finnegans Wake especially. Writing that is a stretch for the normal English-speaking reader comes naturally to Christina Baillie, whether as reader or writer, because, like it or not, she is in that linguistic theatre. It's actually like it and not. Like the triumvirate, she has found ways to produce experimental writing; unlike them, she has only with the utmost difficulty been able to communicate with most other people. Martha's version of all this: "the less medication [Christina] takes, she tells me, the more insistently words decompose. 'Appear' becomes 'app' and 'ear'; seconds later, 'ap' and 'pear' send her thoughts in search of a still life. When every word she hears, or reads, shatters upon contact--her mind a windshield, every word a mess of feather and bone, spray of blood--imposing order exhausts her. 'To shut this down takes enormous energy, which can push me to the edge of passing out.'" So the idea, in setting up the conversation between sisters who can communicate with each other, was to provide a format in which the sister trapped in her own language might find a way to address the larger world. "Bridge" becomes one of the operative words: first between sisters, then between their collaborative text and other readers.