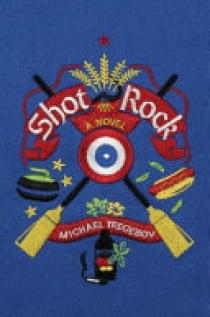 When the smell of October's raked leaves gives way to that of morning frost, a mature Winnipeg man's fancy turns to thoughts of curling. But this fall Blackie Timmerman has been hogging stones off the ice. His wife of twenty years Deirdre has left him; his precocious son Tino has moved out of the house and into political radicality, mentored by a relentlessly principled Michael MacGiligary, scion of the Winnipeg establishment. The two share a devotion to curling and revolutionary socialism, as well as a friendship whose closeness and secretiveness alarm Blackie on every level. And now, his north-end Jewish curling rink, the Queen Victoria, Winnipeg's friendliest club, and most dilapidated, is going to be sold and the club disbanded come spring -- if the Executive, led by Max Foxman and his clique of nouveaux riches, gets their way. The 1970s will be cruel to Blackie, who had expected they would be the gravy on the veal cutlet of an honest modest life. Spurred on by Michael, the only non-Jewish curler at the Queen Victoria, and Tino, both of whom are impatient to make a big political histoire -- combatting injustice and alienation -- Blackie and his curling team, Suddy and Duddy, Oz, and their kibitzer Chickie, decide to take on Max Foxman and the South Enders to deliver the club from the fate of becoming a supermarket, and their having to curl on alien ice in the South End. It's class war on and off the rink, where all is fair, even Duddy's attempt to seduce Max Foxman's wife Sophie, the girl Max Foxman had stolen from Blackie while our hero was part of the Canadian army invading Sicily in WWII. When not distracted by the nostalgia of lost love and gallantry, Blackie believes that curling finesse and canvassing can swing enough club members to vote down Max Foxman, so that for once the North End guys will sit shot rock.