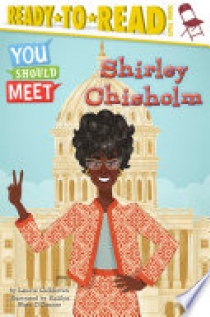 Get to know Shirley Chisholm, the first African American woman to enter the Democratic presidential race, in this fascinating nonfiction Level 3 Ready-to-Read, part of a series of biographies about people “you should meet!” Meet Shirley Chisholm. In 1968, Shirley Chisholm made history as the first African American woman elected to Congress. That same year, Shirley was voted one of the ten most admired women in the world. She also ran for president in 1972, the first African American woman to do so for one of the two big political parties. Shirley showed people it shouldn’t matter if you’re male or female or what the color of your skin is, everyone should be able to pursue their dreams. She lived out her life determined to be “unbossed and unbought” and remained a spokesperson for change. To this day she is still an inspiration to everyone who dreams of breaking boundaries. A special section at the back of the book includes extras like an article on how voting works and a brief lesson on the three branches of US government.