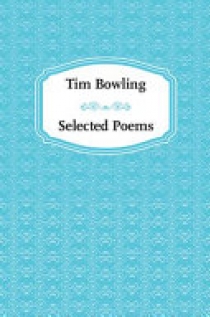 With Selected Poems, Tim Bowling has gathered together his finest poems over a twenty-year period, a selection including work from his widely celebrated debut collection, Low Water Slack, in 1995, to his tenth collection, Tenderman, in 2011. Always a poet of intense emotion and surprising metaphor whose lyric-narrative voice ranges in tone from romantic to humorous to coldly tragic and unrelievedly dark, Bowling's integrity has never wavered, nor has his commitment to celebrating poetic tradition and the land and waterscapes of his cherished West Coast. Selected Poems is unabashedly musical, image-rich and ambitious; poems of the natural world, childhood, family, death, and the pleasures and rigours of art lead into ever-deeper explorations of history, society and middle age, but the faith in the power of language to convey something essential about life remains consistent. This is a book whose pages are viscerally alive with concrete, physical sensations; you can hear the seagulls, smell the wet cedar and brine, and see the sun sink on the great salmon runs with "the clunk of a cue ball." Bowling's particular ability to make his place come alive and to transfer that vitality into a variety of other subjects, from book collecting to beekeeping, has been celebrated throughout his career. Many of the poems gathered here have won significant honours, both in and outside Canada, from the Canada Council for the Arts, the Alberta Foundation for the Arts, the Bridport Prize Foundation in England, and the John Simon Guggenheim Memorial Foundation in the United States. His Selected Poems is a landmark publication in Canadian literature.