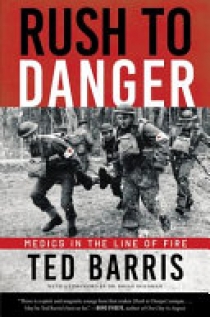 Noted military historian Ted Barris once asked his father, Alex, “What did you do in the war?” What the former US Army medic then told his son forms the thrust of Barris’s latest historic journey—an exploration of his father’s wartime experiences as a medic leading up to the Battle of the Bulge in 1944–45, along with stories of other medics in combat throughout history. Barris’s research reveals that this bloodiest of WWII battles was shouldered largely by military medics. Like his father, Alex, medics in combat evacuated the wounded on foot, scrounged medical supplies where there were seemed to be none, and dodged snipers and booby traps on the most frigid and desolate battlefields of Europe. While retracing his father’s wartime experience, the author weaves into his narrative stories about the life-and-death struggles of military medical personnel during a century of service. In this unique front-line recounting of the experiences of stretcher bearers, medical corpsmen, nurses, surgeons, orderlies, dentists and ambulance drivers, Barris explores the evolution of battlefield medicine at such historic engagements as Fredericksburg, Batoche, the Ypres Salient, the Somme, Vimy, Singapore, Dieppe, Normandy, Falaise, Bastogne, Korea, Iraq and Afghanistan. Barris’s sources reveal—like never before—why men and women sporting the red cross on their helmets or sleeves didn’t flee to safety but chose instead to rush to assist.

By Sinclair Thomson,  Rossana Romano Barragan,  Xavier Albo,  Mark Goodale,  Seemin Qayum
Latin America Readers | March 29, 2020 | 744 pages
The Bolivia Reader provides a panoramic view, from antiquity to the present, of the history, culture, and politics of a country known for its ethnic and regional diversity, its rich natural resources and dilemmas of economic development, and its political conflict and creativity.   END_OF_DOCUMENT_TOKEN_TO_BE_REPLACED
Unusual Histories

The Voyage of the Yacht, Dal

By Andrzej (Andre) Bohomolec
Irene Tomaszewski | May 27, 2019 | 240 pages
In 1933, André Bohomolec and two friends sail his small vessel from Gdynia to Chicago for the World's Fair. That they survived the crossing, despite storms and the questionable seaworthiness of their yacht, is a wonder! This English translation will inspire future generations of young people to...  END_OF_DOCUMENT_TOKEN_TO_BE_REPLACED
Unusual Histories

By Sylvain Tesson
Europa Compass | November 5, 2019 | 224 pages
Lire Magazine Best Travel Book Take four friends, put them on two Ural motorcycles (complete with sidecars), send them off on a 2,500-mile odyssey retracing history's most famous retreat, add what some might consider an excessive amount of Vodka, and you've got Sylvain Tesson'sBerezina, a riotous...  END_OF_DOCUMENT_TOKEN_TO_BE_REPLACED
Unusual Histories

By Keiron Pim
The Experiment | October 1, 2019 | 368 pages
We live in a golden age of archaeological discovery—the perfect time to dig into the spectacular world of dinosaurs. From Aardonyx, a lumbering beast that formed a link between two‐ and four‐legged dinosaurs, to Zuniceratops, who boasted a deadly pair of horns, Dinosaurs—The Grand Tour,...  END_OF_DOCUMENT_TOKEN_TO_BE_REPLACED
Unusual Histories