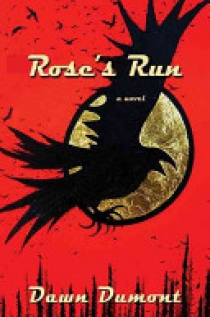 Rose Okanese, a single mother with two kids, has been pushed into a corner by Rez citizens to claim some self-respect, and decides that the fastest way to do that would be for her to run the reserve's annual marathon. Though Rose hasn't run in twenty years, smokes and initially has little motivation, she announces her intention to run the race. One quality Rose doesn't lack is spontaneity which sometimes clashes with her iron will and though she has initial regrets about opening her mouth, her life begins to dictate that she must follow through. But as fate will dictate, one rather huge unforeseen outcome of her decision is that she will have to do battle with an old inadvertently conjured demon that feeds off the strength of women. She is a truly mean old spirit who can invade other women and have them do her bidding and in no time has the Rez in an uproar. As Rose discovers, the old demon has been unintentionally called forth by Rose's teen daughter, Sarah, which complicates Rose's life just a little more. The spirit woman creates a reign of fear and havoc by appearing to people on the reserve and freaking them out, all of which leads to incidents of extreme humour and plot-twisting bemusement, liberally sprinkled with some jittery acts of valour. With a cast of unusual and unfamiliar characters, Dumont interweaves a tale of motherly love, friendship, lustful longing, wîhtikow lore, and Rez humour and keeps the hoopla going until the race is done. At the story's vortex is Rose, a woman destined to face her fears and provide some rich laughter while doing so. Will she send the demon back to where it came from before the spirit claims her teen daughter? Will she get back together with her philandering, rock musician husband before her girls grow up? Will she sort out her best friend's winter pregnancy? But more importantly, will she get this all done before her big, face-saving race with Dahlia Ingram, a woman whom God has designed for one purpose: to run long distances at high speeds with effortless grace.