Restoring Democracy in an Age of Despots and Demagogues 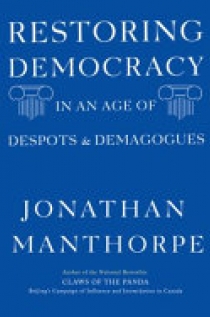 From the bestselling author of Claws of the Panda, Restoring Democracy is a thoughtful account of how we can save democracies from the despots, populists, and trolls that beset them. The book argues that democracy is more resilient than it appears, and is capable of overcoming the attacks from within and without that have sapped its vigour since the end of the Cold War. We begin with a description of the events of 1989, one of the seminal years in modern history. This saw the end of the Cold War, and the apparent conclusive victory of democracy and its civic values. But the view of these changes as a triumph of democracy -- as summed up in Francis Fukuyama's essay "The End of History" -- was short lived. Russia, shorn of its soviet empire, and the Chinese Communist Party, re-examining its survival after the Tiananmen Square Massacre, began devising ways to counter-attack against the West's triumphalism with considerable success. Meanwhile, democracies have allowed internal pressures and contradictions to threaten their own survival. Abandoned industrial workers are turning to the easy answers shouted by populists. Immigrants, refugees, and the reformist fixations of isolated liberal elites have provided ammunition for would-be despots. But the tools for democratic revival are at hand and Restoring Democracy sets out the key dangers and how they can be overcome.