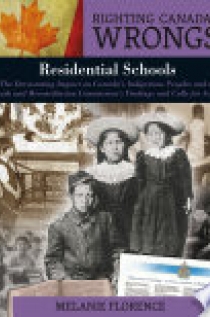 Over more than 100 years, the Canadian government took 150,000 First Nations, Métis, and Inuit children from their families and placed them in residential schools. In these schools, young people were assigned a number, forced to wear European-style clothes, forbidden to speak their native language, required to work, and often subjected to physical and psychological abuse. If they tried to leave the schools to return to their families, they were captured by the RCMP and forced back. Run by churches, the schools were paid for by the federal government.