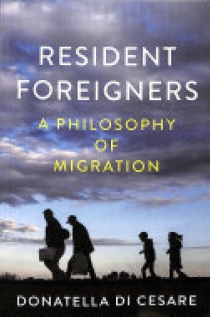 From the shores of Europe to the Mexican-US border, mass migration is one of the most pressing issues we face today. Yet at the same time, calls to defend national sovereignty are becoming ever more vitriolic, with those fleeing war, persecution, and famine vilified as a threat to our security as well as our social and economic order. In this book, written amidst the dark resurgence of appeals to defend ‘blood and soil’, Donatella Di Cesare challenges the idea of the exclusionary state, arguing that migration is a fundamental human right. She develops an original philosophy of migration that places the migrants themselves, rather than states and their borders, at the centre. Through an analysis of three historic cities, Athens, Rome and Jerusalem, Di Cesare shows how we should conceive of migrants not as an other but rather as resident foreigners. This means recognising that citizenship cannot be based on any supposed connection to the land or an exclusive claim to ownership that would deny the rights of those who arrive as migrants. Instead, citizenship must be disconnected from the possession of territory altogether and founded on the principle of cohabitation – and on the ultimate reality that we are all temporary guests and tenants of the earth. Di Cesare’s argument for a new ethics of hospitality will be of great interest to all those concerned with the challenges posed by migration and with the increasingly hostile attitudes towards migrants, as well as students and scholars of philosophy and political theory.