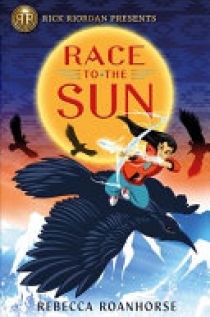 Race to the Sun

Lately, seventh grader Nizhoni Begay has been able to detect monsters, like that man in the fancy suit who was in the bleachers at her basketball game. Turns out he's Mr. Charles, her dad's new boss at the oil and gas company, and he's alarmingly interested in Nizhoni and her brother, Mac, their Navajo heritage, and the legend of the Hero Twins. Nizhoni knows he's a threat, but her father won't believe her. When Dad disappears the next day, leaving behind a message that says "Run!", the siblings and Nizhoni's best friend, Davery, are thrust into a rescue mission that can only be accomplished with the help of Diné Holy People, all disguised as quirky characters. Their aid will come at a price: the kids must pass a series of trials in which it seems like nature itself is out to kill them. If Nizhoni, Mac, and Davery can reach the House of the Sun, they will be outfitted with what they need to defeat the ancient monsters Mr. Charles has unleashed. But it will take more than weapons for Nizhoni to become the hero she was destined to be . . . Timeless themes such as the importance of family and respect for the land resonate in this funny, fast-paced, and exciting quest adventure set in the American Southwest.

By Tori Hane
August 14, 2018 | 12 pages
This shaped board book is perfect for little ones who are growing up and trying new things--like sitting at the table. Is your child ready to transition from high chair to booster seat? These polite peas and other mealtime friends are ready to help! Reinforces manners & socializing Supports...  END_OF_DOCUMENT_TOKEN_TO_BE_REPLACED
Kids' Books

By Bell Hooks
Jump At The Sun | January 3, 2017 | 32 pages
I be boy. All bliss boy. All fine beat. All beau boy. Beautiful. Famed author bell hooks brings us a tight, exuberant story that captures the essence and energy of what it means to be a boy. Chris Raschka's soulful illustrations buzz with a force that is the perfect match for these powerful words....  END_OF_DOCUMENT_TOKEN_TO_BE_REPLACED
Kids' Books

By Cammie McGovern
HarperTeen | January 7, 2020 | 352 pages
From the critically acclaimed author of Say What You Will and A Step Toward Falling comes a deeply emotional new novel, perfect for fans of Five Feet Apart and The Fault in Our Stars. David Scheinman is the popular president of his senior class, battling cystic fibrosis. Jamie Turner is a quiet...  END_OF_DOCUMENT_TOKEN_TO_BE_REPLACED
Kids' Books

Clive and His Babies

By Jessica Spanyol
Child's Play International | March 16, 2016 | 14 pages
Meet Clive - and his imagination! Clive loves his dolls. He enjoys playing with them, and sharing them with his friends. A gentle, affectionate book, celebrating diversity and challenging gender stereotypes.   END_OF_DOCUMENT_TOKEN_TO_BE_REPLACED
Kids' Books

A Journey to the Mother of the Sea

By Maliaraq Vebk
Inhabit Media | October 1, 2019 | 32 pages
The sea animals have disappeared, and people are starving. An old couple, once great shamans, are asked to journey to the Mother of the Sea to find out what happened to the animals. But the journey is dangerous and the old woman does not know if she will be able to please the Mother of the Sea and...  END_OF_DOCUMENT_TOKEN_TO_BE_REPLACED
Kids' Books