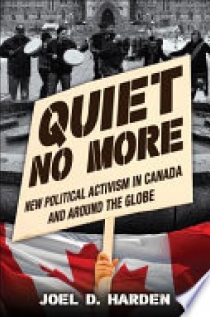 Spontaneous and creative protest movements have burst onto the political stage in Canada and around the world. Joel D. Harden, an activist, writer, and educator, offers a ground-level account of the most important of these recent expressions of large-scale political engagement, mostly by young people. Based on first-hand accounts from many of the participants and organizers, Harden describes key events and turning-points -- in Canada and beyond -- from the viewpoint of a committed insider. Harden believes that these new bottom-up movements are the most challenging and effective agent of political change on the scene today, galvanizing people to express their views actively in the streets and parks or in their workplaces. The political and corporate power structure has been shaken by these challenges, sometimes enough to generate real political change. Political analysts, journalists and academics have not yet come to terms with this new activism. Harden briefly reviews theories that fail to capture its essence and those that come close to getting it. In a concluding chapter addressed to students and participants in these social movements he offers his own take on a "movement-relevant" theory informed by his own considerable experience as a widely respected Canadian activist. This book offers new thinking about how ordinary citizens -- particularly young people -- have started to take back power in our democracy and change the world.