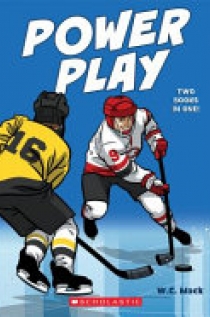 Two action-packed hockey novels in one volume! This special edition features two middle-grade novels starring JT "Nugget" McDonald and his friends and foes. Contemporary readers will identify with J.T.'s struggles, both on and off the ice. Includes Hat Trick and Line Change: HAT TRICK J.T. McDonald is the smallest guy on the team-but he's not letting that interfere with his plans to rule the rink this hockey season! He is determined to play against the biggest team in the league . . . that is until a giant new player joins the team-and he's a right winger too, just like J.T. When J.T. needs help bringing up his math grades, can he accept it from his biggest competition? LINE CHANGE J.T. McDonald is finally back on the ice with his team, doing better at math thanks to his tutor. When Coach O'Neil has a bad fall on the ice, the team is suddenly left without a coach mid-season. J.T. is thrilled when his dad steps in to lead the team-but his teammates have a harder time adjusting. Can the team get back on track before the season ends?