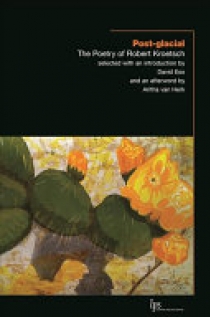 Post-glacial is a collection of poems by Robert Kroestch selected by his former student David Eso. The book features Kroetsch's iconic collection, Completed Field Notes, alongside rare work gathered from different stages of Kroetsch's career. The book contains an afterword by Aritha van Herk. Kroetsch's poetry evolved from short lyric poetry in the 1960s to postmodern long poems in the 1970s and 80s. Kroetsch's work in the 1990s and 2000s was marked by the production of experimental chapbooks. Yet it is in the 2000s that Kroetsch's celebrated The Hornbooks of Rita K and his final collection, Too Bad, were published. Post-glacial presents the material in a thematic arc that follows daily, seasonal, and biographical topics. The collection moves from moods of morning, spring, and youth to shades of darkness, winter, and mourning. In the introduction, Eso charts Kroetsch's early attempts at poetry in his teenage and undergraduate years. Eso takes the title Post-glacial from the poem "Lonesome Writer Diptych" and proposes the term as an alternative to "postmodernism," a term often used by critics to describe Kroetsch's work. Post-glacial emphasizes the poet's interest in landscape, ecology, history, the presence of absence, and the endurance of a living past.