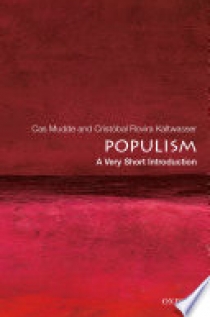 Populism is a central concept in the current media debates about politics and elections. However, like most political buzzwords, the term often floats from one meaning to another, and both social scientists and journalists use it to denote diverse phenomena. What is populism really? Who are the populist leaders? And what is the relationship between populism and democracy? This book answers these questions in a simple and persuasive way, offering a swift guide to populism in theory and practice.