Political Argument in a Polarized Age 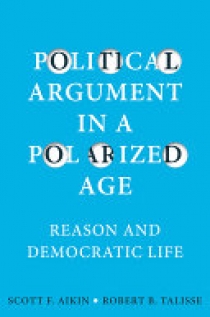 From obnoxious public figures to online trolling and accusations of “fake news”, almost no one seems able to disagree without hostility. But polite discord sounds farfetched when issues are so personal and fundamental that those on opposing sides appear to have no common ground. How do you debate the “enemy”? Philosophers Scott Aikin and Robert Talisse show that disagreeing civilly, even with your sworn enemies, is a crucial part of democracy. Rejecting the popular view that civility requires a polite and concessive attitude, they argue that our biggest challenge is not remaining calm in the face of an opponent, but rather ensuring that our political arguments actually address those on the opposing side. Too often politicians and pundits merely simulate political debate, offering carefully structured caricatures of their opponents. These simulations mimic political argument in a way designed to convince citizens that those with whom they disagree are not worth talking to. Good democracy thrives off conflict, but until we learn the difference between real and simulated arguments we will be doomed to speak at cross-purposes. Aikin and Talisse provide a crash course in political rhetoric for the concerned citizen, showing readers why understanding the structure of arguments is just as vital for a healthy democracy as debate over facts and values. But there’s a sting in the tail - no sooner have we learned rhetorical techniques for better disagreement than these techniques themselves become weapons with which to ignore our enemies, as accusations like “false equivalence” and “ad hominem” are used to silence criticism. Civility requires us to be eternally vigilant to the ways we disagree.