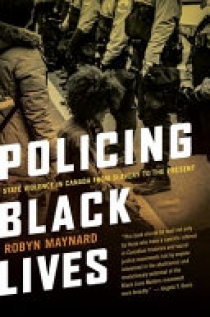 "Policing Black Bodies is a timely and much-needed exposure of historical and contemporary practices of state-sanctioned violence against Black lives in Canada. This groundbreaking work dispels many prevailing myths that cast Canada as a land of benevolence and racial equality, and uncovers long-standing state practices that have restricted Black freedom. A first of its kind, Policing Black Bodies creates a framework that makes legible how anti-Blackness has influenced the construction of Canada's carceral landscape, including the development and application of numerous criminal law enforcement and border regulation practices. The book traces the historical and contemporary mobilization of anti-Blackness spanning from slavery, 19th and 20th century segregation practices, and the application of early drug and prostitution laws through to the modern era. Maynard makes visible the ongoing legacy of a demonized and devalued Blackness that is manifest today as racial profiling by police, immigration agents and social services, the over-representation of Black communities in jails and prisons, anti-Black immigration detention and deportation practices, the over-representation of Black youth in state care, the school-to-prison pipeline and gross economic inequality. Following the dictums of the Black Lives Matter movement, Policing Black Bodies adopts an intersectional lens that explores the realities of those whose lives and experiences have historically been marginalized, stigmatized, and made invisible. In addressing how state practices have impacted Black lives, the book brings from margin to centre an analysis of gender, class, sexuality, (dis)ability, citizenship and criminalization. Beyond exploring systemic racial injustice, Policing Black Bodies pushes the limits of the Black radical imagination: it delves into liberatory Black futures and urges the necessity of transformative alternatives."--