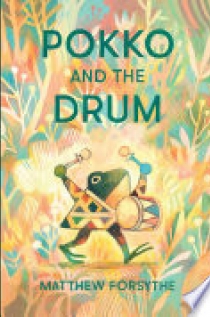 A Publishers Weekly Most Anticipated Book for Fall 2019 “In embracing one’s own beat, Pokko discovers, extraordinary things can happen.” —Publishers Weekly (starred review) “Forsythe's coy, playful writing is a wonder on its own, but the lush...illustrations beautifully elevate the tale...Inspirational.” —Booklist (starred review) “Celebrating both community and individuality, this droll, funny offering will tickle kids and adults alike.” —Kirkus Reviews “Has the feel of an instant classic, the kind of book you can easily convince yourself has been around forever, spreading joy.” —Quill & Quire (starred review) From E.B. White Read Aloud honor artist Matthew Forsythe comes a picture book about a magical drum, an emerald forest, and the little frog who dares to make her own music. The biggest mistake Pokko’s parents ever made was giving her the drum. When Pokko takes the drum deep into the forest it is so quiet, so very quiet that Pokko decides to play. And before she knows it she is joined by a band of animals —first the raccoon, then the rabbit, then the wolf—and soon the entire forest is following her. Will Pokko hear her father’s voice when he calls her home? Pokko and the Drum is a story about art, persistence, and a family of frogs living in a mushroom.