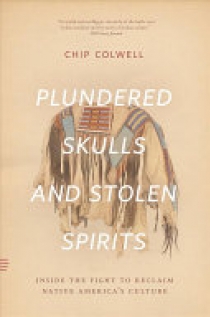 Who owns the past and the objects that physically connect us to history? And who has the right to decide this ownership, particularly when the objects are sacred or, in the case of skeletal remains, human? Is it the museums that care for the objects or the communities whose ancestors made them? These questions are at the heart of Plundered Skulls and Stolen Spirits, an unflinching insider account by a leading curator who has spent years learning how to balance these controversial considerations. Five decades ago, Native American leaders launched a crusade to force museums to return their sacred objects and allow them to rebury their kin. Today, hundreds of tribes use the Native American Graves Protection and Repatriation Act to help them recover their looted heritage from museums across the country. As senior curator of anthropology at the Denver Museum of Nature & Science, Chip Colwell has navigated firsthand the questions of how to weigh the religious freedom of Native Americans against the academic freedom of scientists and whether the emptying of museum shelves elevates human rights or destroys a common heritage. This book offers his personal account of the process of repatriation, following the trail of four objects as they were created, collected, and ultimately returned to their sources: a sculpture that is a living god, the scalp of a massacre victim, a ceremonial blanket, and a skeleton from a tribe considered by some to be extinct. These specific stories reveal a dramatic process that involves not merely obeying the law, but negotiating the blurry lines between identity and morality, spirituality and politics. Things, like people, have biographies. Repatriation, Colwell argues, is a difficult but vitally important way for museums and tribes to acknowledge that fact—and heal the wounds of the past while creating a respectful approach to caring for these rich artifacts of history.

By Georges Sioui
November 30, 2019 | 200 pages
An exploration of the historical and future significance of Canada's Native soul.   END_OF_DOCUMENT_TOKEN_TO_BE_REPLACED
Indigenous Studies

By Beverly Little Thunder
Inanna Memoir Series | March 28, 2020 | 213 pages
Literary Nonfiction. Native American Studies. Women's Studies, Gay. LGBT Studies. ONE BEAD AT A TIME is the oral memoir of Beverly Little Thunder, a two-spirit Lakota Elder from Standing Rock, who has lived most of her life in service to Indigenous and non- Indigenous women in vast areas of both...  END_OF_DOCUMENT_TOKEN_TO_BE_REPLACED
Indigenous Studies

By Tasha Spillett
HighWater Press | March 1, 2019 | 54 pages
Tasha Spillett's graphic novel debut, Surviving the City, is a story about womanhood, friendship, colonialism, and the anguish of a missing loved one. Miikwan and Dez are best friends. Miikwan is Anishinaabe; Dez is Inninew. Together, the teens navigate the challenges of growing up in an urban...  END_OF_DOCUMENT_TOKEN_TO_BE_REPLACED
Indigenous Studies

By Richard Green
March 28, 2020 | 200 pages
Richard Green presents twenty-six essays in six categories, representing a wide range of topics—from eighteenth and nineteenth century sketches, to books and treasures, and revivals. Readers are treated to stories that include a Chickasaw citizen's struggle with the aftermath of the 1995 bombing...  END_OF_DOCUMENT_TOKEN_TO_BE_REPLACED
Indigenous Studies

By Heather Dorries,  Robert Henry,  David Hugill,  Tyler McCreary,  Julie Tomiak
October 4, 2019 | 336 pages
While cities like Winnipeg, Minneapolis, Saskatoon, Rapid City, Edmonton, Missoula, Regina, and Tulsa are places where Indigenous marginalization has been most acute, they have also long been sites of Indigenous placemaking and resistance to settler colonialism. Although such cities have been...  END_OF_DOCUMENT_TOKEN_TO_BE_REPLACED
Indigenous Studies