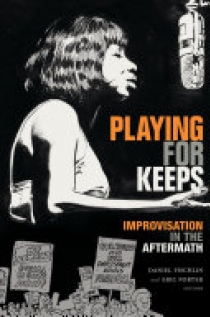 "PLAYING FOR KEEPS is an edited volume of essays exploring the global dimensions of musical improvisation. The editors are interested in what they call the "aftermaths" associated with improvisational music practices: the various ways musical improvisation can respond in the aftermath of trauma, and the imagined possibilities that lie in the wake of improvisatory performance. The volume is presented as global case studies, each offering an example of how musical improvisation can foster communal responses to the realities of colonialism, imperialism, and war. By turning its attention to the global scale, this volume seeks to complicate the notion, popular within North American contexts, that improvisation necessarily leads to liberation. Instead, the editors seek to situate improvisation within local contexts, and, by examining how improvisational music practices are enmeshed in local and global power structures, point to improvisation as a site of potentiality. The volume is comprised of twelve chapters, with an introduction by the editors. Chapter One, Matana Roberts's poem "manifesto," stages improvisatory practice on the page in the form of a response to the Preamble of the United States Constitution. In chapter 2, Stephanie Vos examines the communal response to the burglary of the Zimology Institute in South Africa-an institute dedicated to educational programs about musical improvisation-which itself took the form of an improvisational music performance. Chapter 4, an interview with jazz musician and composer Vijay Iyer, examines Iyer's collaborative project Holding it Down, a performance of poetry and music that explores the experiences of US veterans of color. This chapter, in particular, complicates notions of improvisation, as Iyer claims that both oppressed people and their oppressors use improvisatory practices to accomplish their respective goals. In Chapter 8 Darci Sprengel documents the use of Tarab, a practice of "deep listening" that dissolves the distinction between self and other, by Mini Mobile Concerts (MMC), an improvisational concert group active in post-Mubarak Egypt. In particular, Sprengel focuses on how the improvisational practices of MMC addressed the topic of sexual assault, thereby renegotiating the gendered public space of the street. Chapter 9, an interview with Reem Abdul Hadi and Odej Turjman of the Al Mada Association for Art-Based Community, examines how Palestinians in the Occupied West Bank and Palestine use music improvisation to negotiate the erasure of their land, culture, and identity. Other locations explored in the volume include Afro/Canarian jazz in the Canary Islands; indigenous music practices in Canada; jazz and civil rights in the United States; and popular music in Israel. This volume will be of interest to scholars of jazz, music studies, performance theory, and cultural studies, as well as colonial and postcolonial studies"--