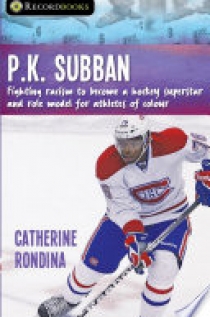 Born in Canada to parents who emigrated from the Caribbean, P.K. Subban is a remarkable athlete and role model. A talent on the ice, playing for some of the best teams in the NHL, P.K. has set records and won the Norris Trophy, the highest honour in hockey for a defenceman. Often the centre of controversy, at one time named one of the most hated hockey players in the NHL for his outspoken attitude, he is the pride of many fans across Canada and a hero to young athletes of colour. His stand against racism relies more on actions to support others than on relating his own experiences.