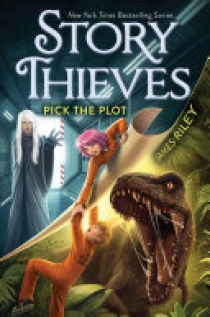 Readers choose what happens when Owen finds himself stuck in a Pick Your Own Plot story, in this fourth book in the New York Times bestselling series, Story Thieves—which was called a “fast-paced, action-packed tale” by School Library Journal—from the author of the Half Upon a Time trilogy. Being able to jump into books used to seem like the greatest thing in the world to Owen Conners. But now Owen’s trapped in a time travel book where readers—that would be you—decide how the story goes. As if that weren’t enough, Owen’s also stuck in a prison for time criminals in a prehistoric era.