By Christopher B. Patterson 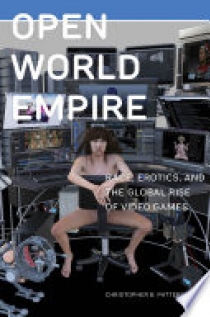 Seeking ways to understand video games beyond their imperial logics, Patterson turns to erotics to re-invigorate the potential passions and pleasures of play Video games vastly outpace all other mediums of entertainment in revenue and in global reach. On the surface, games do not appear ideological, nor are they categorized as national products. Instead, they seem to reflect the open and uncontaminated reputation of information technology. Video games are undeniably imperial products. Their very existence has been conditioned upon the spread of militarized technology, the exploitation of already-existing labor and racial hierarchies in their manufacture, and the utopian promises of digital technology. Like literature and film before it, video games have become the main artistic expression of empire today: the open world empire, formed through the routes of information technology and the violences of drone combat, unending war, and overseas massacres that occur with little scandal or protest. Though often presented as purely technological feats, video games are also artistic projects, and as such, they allow us an understanding of how war and imperial violence proceed under signs of openness, transparency, and digital utopia. But the video game, as Christopher B. Patterson argues, is also an inherently Asian commodity: its hardware is assembled in Asia; its most talented e-sports players are of Asian origin; Nintendo, Sony, and Sega have defined and dominated the genre. Games draw on established discourses of Asia to provide an “Asiatic” space, a playful sphere of racial otherness that straddles notions of the queer, the exotic, the bizarre, and the erotic. Thinking through games like Overwatch, Call of Duty 4: Modern Warfare, Shenmue II, and Alien: Isolation, Patterson reads against empire by playing games erotically, as players do—seeing games as Asiatic playthings that afford new passions, pleasures, desires, and attachments.