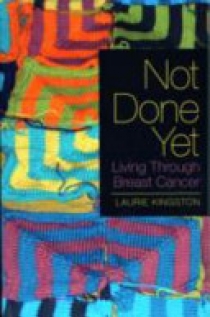 Not Done Yet opens a window on one woman's journey through breast cancer treatment, recovery, recurrence, and beyond. When she found a lump in her breast in December 2005, Laurie Kingston was thirty-eight, with an active life, a family, and a demanding job. A diagnosis of breast cancer was nowhere on her radar screen. But when that diagnosis was confirmed months later, Laurie began writing a blog. She wanted to process her reactions and express what she was feeling. Above all, she wanted to write about her experience in her own way. Spanning a two-year period, the entries are written matter-of-factly, in clear and engaging language. They take the reader on a compelling journey—from first diagnosis and what that meant personally and professionally, to preparing for treatments, learning how to ask questions of hospital caregivers, and coping with the physical hardships of undergoing chemotherapy. When Laurie learned in November 2006 that the cancer had spread to her liver, she was devastated. But she kept on writing--and went from a prognosis of "years not decades" and innumerable tumours, to "spectacular" results and (at last count) six clean scans under her belt. Laurie writes with both humour and compassion about her ups and downs as she comes to grips with this new reality. Not Done Yet will speak to those who are going through the same experience, those who know someone who is, or anyone who has wondered about living joyfully when life has been turned upside down.