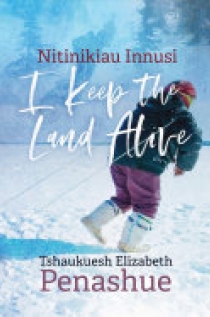 Labrador Innu cultural and environmental activist Tshaukuesh Elizabeth Penashue is well-known both within and far beyond the Innu Nation. The recipient of a National Aboriginal Achievement Award and an honorary doctorate from Memorial University, she has been a subject of documentary films, books, and numerous articles. She led the Innu campaign against NATO's low-level flying and bomb testing on Innu land during the 1980s and '90s, and was a key respondent in a landmark legal case in which the judge held that the Innu had the "colour of right" to occupy the Canadian Forces base in Goose Bay, Labrador. Over the past twenty years she has led walks and canoe trips in nutshimit, "on the land," to teach people about Innu culture and knowledge.Nitinikiau Innusi: I Keep the Land Alive began as a diary written in Innu-aimun, in which Tshaukuesh recorded day-to-day experiences, court appearances, and interviews with reporters. Tshaukuesh has always had a strong sense of the importance of documenting what was happening to the Innu and their land. She also found keeping a diary therapeutic, and her writing evolved from brief notes into a detailed account of her own life and reflections on Innu land, culture, politics, and history.Beautifully illustrated, this work contains numerous images by professional photographers and journalists as well as archival photographs and others from Tshaukuesh's own collection.

By Allison Adelle Hedge Coke
Bison Books | January 1, 2014 | 198 pages
Rock, Ghost, Willow, Deer is Allison Adelle Hedge Coke’s searching account of her life as a mixed-blood woman coming of age off reservation, yet deeply immersed in her Huron, Métis, and Cherokee heritage. In a style at once elliptical and achingly clear, Hedge Coke details her mother’s...  END_OF_DOCUMENT_TOKEN_TO_BE_REPLACED
Indigenous Studies

By Devi Dee Mucina
October 18, 2019 | 240 pages
Ubuntu is a Bantu term meaning humanity. It is also a philosophical and ethical system of thought, from which definitions of humanness, togetherness, and social politics of difference arise. Devi Dee Mucina is a Black Indigenous Ubuntu man. In Ubuntu Relational Love, he uses Ubuntu oratures as...  END_OF_DOCUMENT_TOKEN_TO_BE_REPLACED
Indigenous Studies

By Sarah A. Nickel
UBC Press | September 1, 2019 | 236 pages
Established narratives portray Indigenous unity as emerging solely in response to the political agenda of the settler state. But unity has long shaped the modern Indigenous political movement. With Indigenous perspectives in the foreground, Assembling Unity explores the relationship between global...  END_OF_DOCUMENT_TOKEN_TO_BE_REPLACED
Indigenous Studies

By Daniel H. Usner, Jr.
U of Nebraska Press | April 1, 2020 | 205 pages
During the eighteenth and nineteenth centuries, the Native peoples inhabiting the Lower Mississippi Valley confronted increasing domination by colonial powers, disastrous reductions in population, and the threat of being marginalized by a new cotton economy. Their strategies of resistance and...  END_OF_DOCUMENT_TOKEN_TO_BE_REPLACED
Indigenous Studies

The Truth that Wampum Tells

By Lynn Gehl
April 1, 2020 | 151 pages
"From the Foreword, by Heather Majaury:I am prone to think that when Creator lowered Lynn to Mother Earth it was for herto complete this difficult task of bravery. Indeed we can all learn from her, as she hasfulfilled her responsibility.In commemoration of the 250th anniversary of the Treaty at...  END_OF_DOCUMENT_TOKEN_TO_BE_REPLACED
Indigenous Studies