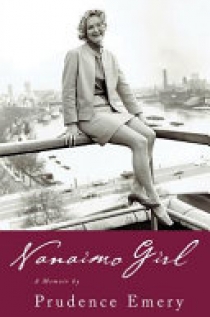 Born in Nanaimo to a family of eccentrics, Prudence Emery was set up to do all the right things: she went to Crofton House private school for girls in Vancouver, attended the Trafalgar Day Ball, and was a debutante. But she shattered family expectations when she took off for London to attend art school. There, living on an allowance from her father, she met and became fast friends with an astonishing array of people, and at the expense of her studies, she became a party girl. After her father cautioned her that he would not pay for such a decadent lifestyle, she moved to Montreal and landed a job at Expo 67. After this, she returned to London to work in the press office of the Savoy Hotel - back in the days when the Savoy was the home-away-from-home for the stars of stage and film, political figures, and royalty. Realising that she would die of champagne consumption, she returned to Canada where she worked as a film publicist. Upon retirement, she moved to Victoria where she continues to live a life that is anything but prudent. Delightfully written, this often very funny memoir is a testament to a life well-lived and an encouragement to all, young and old, to get out, defy expectations, and have a rip-roaring good time.