My Family, A Symphony 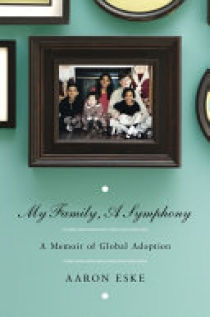 Before Madonna and Angelina Jolie made international adoption fashionable, Aaron Eske grew up in rural Nebraska with four siblings his parents adopted from around the globe. Each one arrived with severe health issues: Meredith was born without toes and was never supposed to walk; Jamie weighed two pounds and had cerebral palsy; and Jordan had his first heart catheter when he was five. His sister Michelle had suffered abuse in India and experienced trauma as a teenager. As an adult, trying to make sense of how his global family came to be, Eske bought a round-the-world plane ticket and journeyed in search of his siblings' origins. He visited the orphanages where they had lived, met the people who had cared for them, and immersed himself in the the world of international adoption with visits to a slum school in India, the landmine-loaded North Korean border, and a tribal prom in an Ethiopian rainforest. The result is a harrowing, complex, and ultimately triumphant story of international adoption that highlights the issues surrounding this increasingly popular parenting option.