More Caps for Sale: Another Tale of Mischievous Monkeys 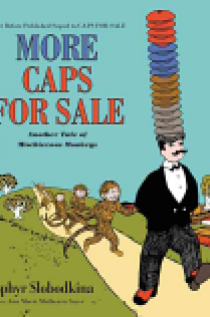 Celebrate the 75th anniversary of the perennial favorite Caps for Sale with this never-before-published sequel to the beloved classic! In this first posthumous book from Esphyr Slobodkina, those mischievous monkeys are at it again, bringing laughs to a new generation of readers! The sequel, More Caps for Sale, picks up right where Caps for Sale left off, as the peddler comes face-to-face with those monkeys and their funny business yet again! Slobodkina and her longtime collaborator, Ann Marie Mulhearn Sayer, had many long conversations as they planned More Caps for Sale before Esphyr's death in 2002. With simple text and illustrations, filled with warmth and humor, this sequel is perfect for early readers and follows a great folktale tradition. Since Caps for Sale was first published in 1940, millions of children have savored the original tale of the peddler, his caps, and a band of very funny monkeys, and now this charming sequel continues the story!