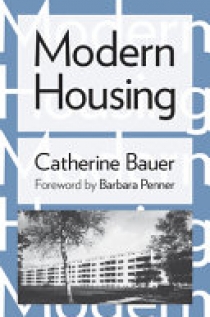 The original guide on modern housing from the premier expert and activist in the public housing movement Originally published in 1934, Modern Housing is widely acknowledged as one of the most important books on housing of the twentieth century, introducing the latest developments in European modernist housing to an American audience. It is also a manifesto: America needs to draw on Europe's example to solve its housing crisis. Only when housing is transformed into a planned, public amenity will it truly be modern. Modern Housing's sharp message catalyzed an intense period of housing activism in the United States, resulting in the Housing Act of 1937, which Catherine Bauer coauthored. But these reforms never went far enough: so long as housing remained the subject of capitalist speculation, Bauer knew the housing problem would remain. In light of today's affordable housing emergency, her prescriptions for how to achieve humane and dignified modern housing remain as instructive and urgent as ever.